If there is one essential sewing skill that everybody should learn, I’d certainly vouch for it to be the skill of sewing buttons.  Whether you are looking to mend your clothing, or to build your sewing skills, without doubt, you will want to know how to sew on a button. Follow along as this tutorial will cover how to sew buttons (shank and sew-through) by hand and machine.

Sewing Buttons by Hand and with a Sewing Machine

Before knowing how to sew a button, you will first need to know the proper placement of the button in relation to its buttonhole:

Sewing patterns will typically mark button placement for you, but I always like to double-check my button placement using this rule after my buttonholes are sewn. Many times, when mending garments, you can tell where the button had been placed, but under the circumstance, there is no mark to help indicate, you can use this rule to place the button back into its proper spot easily. It is essential to ensure a proper alignment to avoid unwanted gapping between buttonholes.

As previously mentioned, there are two types of buttons that are attached to a garment by sewing, these are called shank and sew-through buttons.

A shank button has a solid surface with a shank on its underside. The shank is a piece, often shaped as a small loop, that creates space between the button and the fabric. Because the shank causes the button to sit higher above the fabric, this type of button is most recommended for use on garments with bulky or heavy-weight fabrics.

In addition to creating needed space for bulkier fabrics, the shank is where the thread will be sewn through in the sewing process to secure the button to the fabric.  Due to its anatomy, this type of button can only be sewn by hand.

How to Hand Sew a Shank Button

The thread used in the garment construction can also be used for sewing on a button. Since shank buttons are typically sewn onto heavier-weight fabrics, you can also use a thicker thread, such as a button or topstitching thread, for some extra strength.

Some suggest threading the needle with a single-strand thread when sewing buttons to avoid unwanted knotting of the thread.  I like to thread my hand sewing needle, as usual, with a double thread strand, because I like the double thickness and also find it easier to work with. I find that as long as I keep my thread to a shorter length, I can typically avoid knots.  You can also run your thread through beeswax to help prevent knotting.

To thread your hand-sewing needle, run the thread through the eye of the needle, tie the ends in a knot, and trim off any excess thread at the knot.

In this step, you will be knotting the thread to the fabric at the spot where the button is to be sewn. For an extra clean look, do this on the right side of the fabric instead of the underside and the knot will be hidden underneath the button.

A.) Slide the needle through the fabric at the button marking (In the photo below, I am using a pin to mark where my button is to be sewn)

B.) Pull the thread all the way until there is a small loop left near the thread tail

C.) Put the needle through the thread loop

Do this twice for added security.

Once the thread is secured to the fabric, run the needle through the hole in the shank and back into the garment, pulling tight. Do this 4-5 times or until the button is secured.

To tie off the thread, create a knot in the same way done to secure the thread to the fabric in step 2. To create a clean finish, you can “bury” your thread tail and knot by running the needle once more through the fabric. Cut the thread as close as possible where it resurfaces.

A sew-through button, sometimes called a flat button,  has a flat surface containing two or four small holes in its center. These buttons can be sewn on by hand or by sewing machine. These buttons are better suited for thinner or lightweight fabrics because they are flat against the fabric, therefore, there is less room for bulky fabrics.

Though, if desired, it is certainly possible to use on thick and heavy-weight fabrics.  If this is your desire, you will need to create a shank for the button so there is space for the extra bulk.  This can be done during the sewing process and using thread.  This will be explained later in the step-by-step.

How to Hand Sew a Sew Through Button

Thread the needle as described in step 1 of the shank button tutorial.

You can use matching or contrasting threads depending upon your design choice.

Secure the thread as described in step 2 of the shank button tutorial.

You have two sewing options for flat buttons with 4 holes.  Option 1 will create two parallel lines of thread on the button face, while option 2 will create an ‘x’.  The visuals below will show how to attach the button for each of these options as well as a flat button with only two holes. 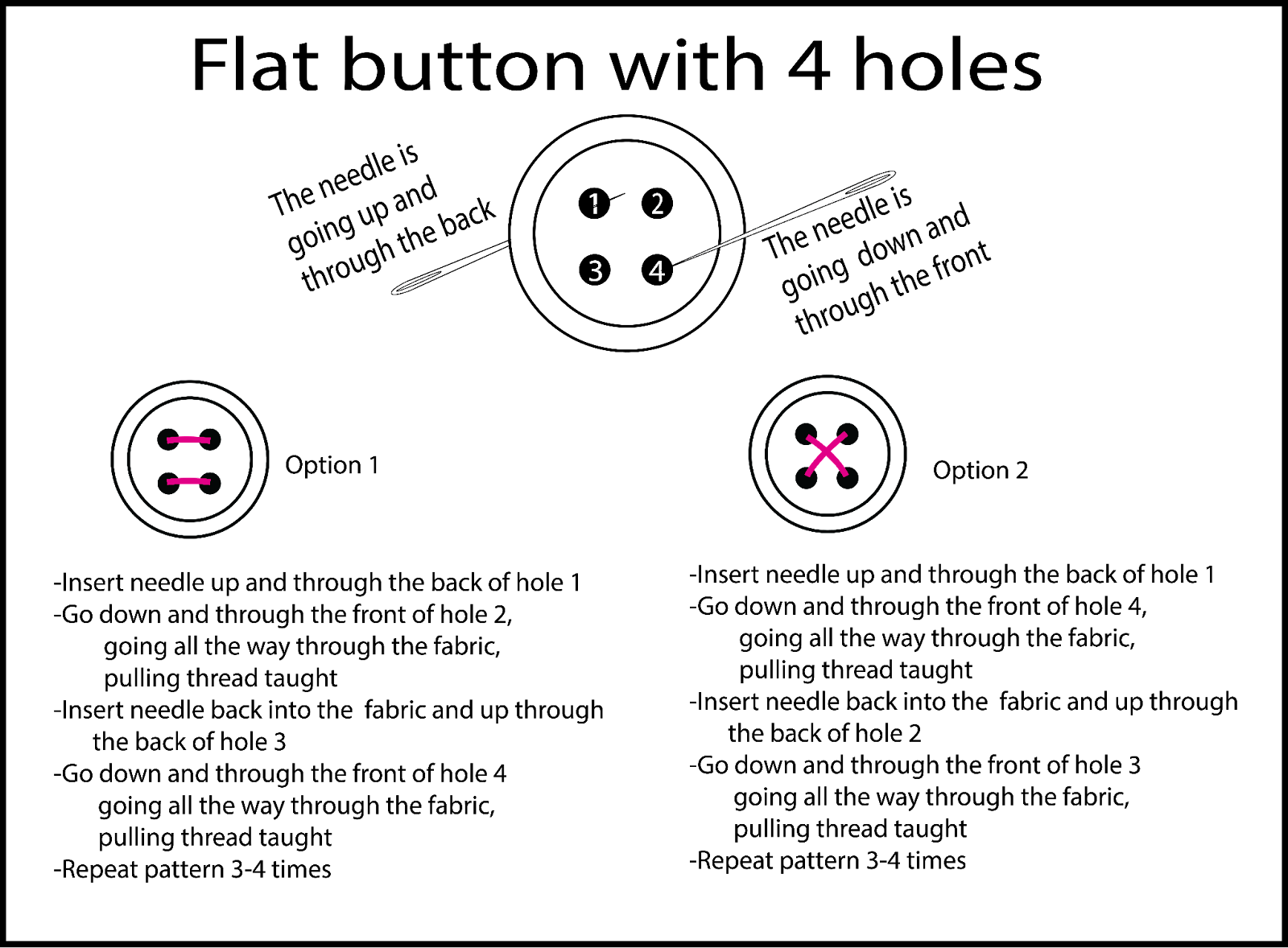 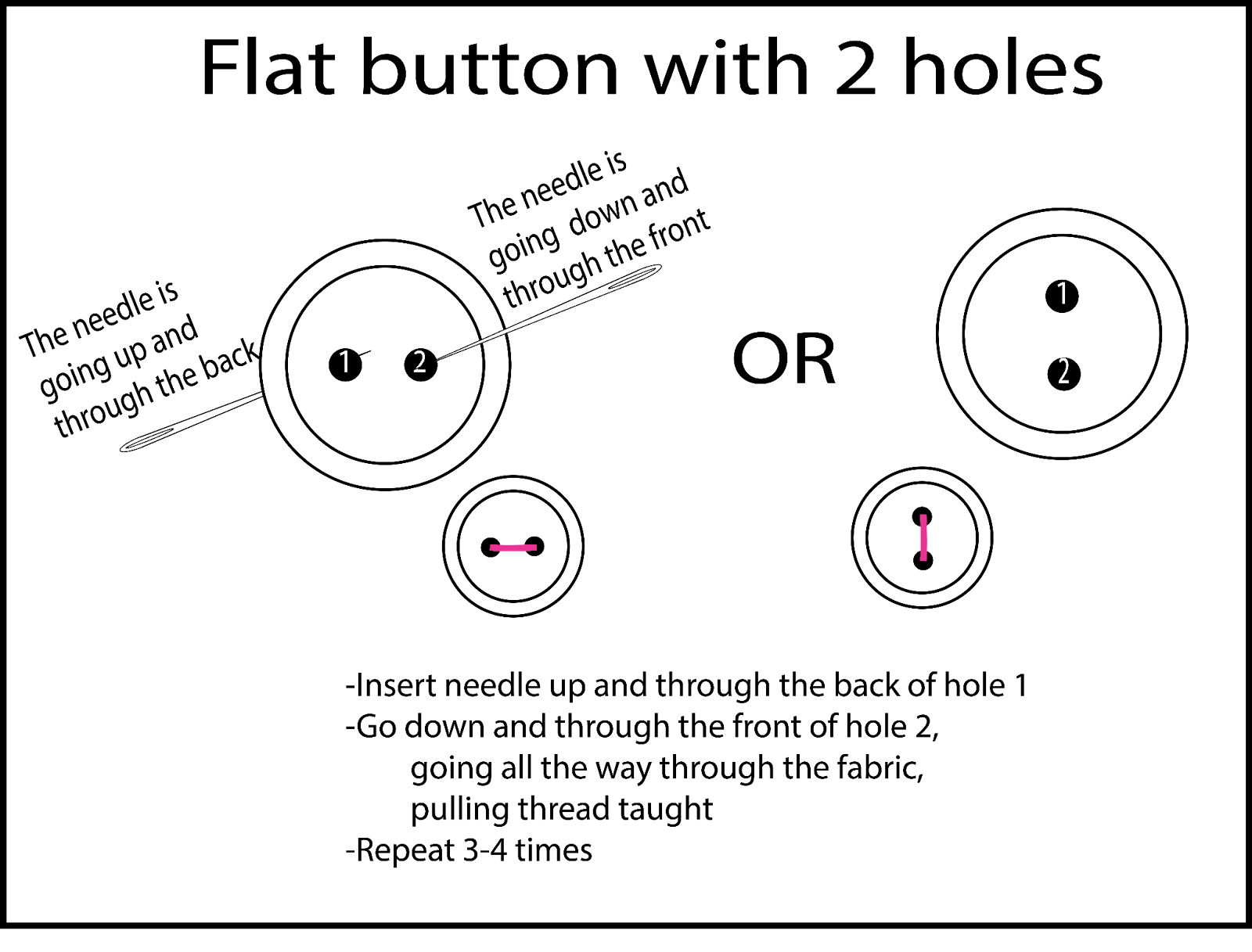 Tie off the thread as described in step 4 of the shank button tutorial. If you are sewing the button flat to the fabric without adding a thread shank, this may be easier done on the backside of the material.

How to Add a Thread Shank to a Sew-Through Button

If you are sewing a flat button (without a shank) onto thick fabric, you must add your own shank made by thread.  While following steps 1-4 from the previous step-by-step, prevent the button from being sewn tight against the fabric by keeping the tip of your thumb underneath the button.

Then, between steps 3 and 4 wrap the thread multiple times around the base of the button to create a small shank.

Tie off the thread the same way as described previously.

How to Sew a Sew Through Button Using a Sewing Machine

The great thing about sew-through buttons is that they can be sewn using a sewing machine, which can save quite a bit of time, especially on garments with lots of buttons.

With the garment on the sewing plate, place the button under the button foot so that the needle is aligned between the two holes being sewn, ensuring it is properly lined up with its designated spot on the garment. Lower the presser foot so that it is securely holding the button in place.

Using a zig-zag stitch, adjust the width so that the needle will perfectly line up with each hole as it moves left and right.  Before sewing anything, slowly move the hand wheel to double check the needle and holes on the button are properly lined up with each other.  It may take a little trial and error to get the stitch width to its perfect setting. Once you are positive the stitch width is correct and the needle does not touch the button at all when the hand wheel is turned, sew about 8-10 stitches going slowly and carefully.

Cut the thread leaving a tail long enough to be tied off.  Using a seam ripper or other sharp tip, pull all thread tails to the backside of the fabric and tie off in a knot.

If you are sewing your flat button via machine but need a thread shank, start by placing a pin at the center of the button as a part of Step 3.  The button foot should have a small opening at its center to slide the pin into.

You have successfully learned all that you need to know to beautifully and efficiently sew buttons! Now that you’ve mastered the buttons take a look at this great tutorial for sewing buttonholes:  https://www.peekaboopages.com/how-to-sew-a-buttonhole/

Other patterns and Tutorials

We’d like to thank Danika for this great tutorial on sewing buttons. If you feel inspired to put your knowledge to use, check out these super fun tutorials for some great button-up patterns: 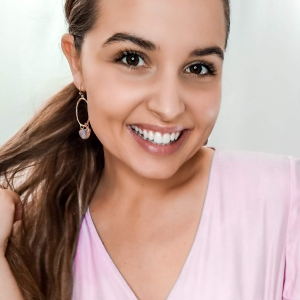