How to Use Bias Tape | Free Tutorial | 3 Methods

Today, we’re going to teach you how to use bias tape, one of our favorite sewing accessories. Some of the thoughts and information at the beginning are from Peek-a-Boo Pages and then Pienkel gives us a step-by-step tutorial on how to sew with bias tape. In fact, she gives us 3 different methods to apply bias tape. We also have a helpful tutorial on How to Make Your Own Bias Tape.

I use it as a fast way to finish hems, especially curved ones, but mostly as a way to add a pop of color to a basic fabric. I’ll also teach you a little about what bias is in sewing, different types of bias tape, and what you need to look for when sewing it.

How to Use Bias Tape for Sewing

First, What is the Bias in Sewing?

The reason that the bias is important is that it’s the most stretchy portion of the woven fabric. Fabric strips cut from this bias section will have more stretch than if they were cut in the vertical or horizontal sections.

What is Bias Tape and What is it Used for?

Now that you know what bias is, you can better understand what bias tape is. Bias tape is long strips of fabric that are cut from that “bias” section of the fabric noted above. They are stretchier than fabric that would be cut from the cross-grain or straight-grain sections of the fabric (although the bias fabric still isn’t overly stretchy like a knit fabric). The stretchiness allows these strips of fabric to more easily go around the curved edges of fabric that you’ll likely have in different openings or edges. Some people use the term bias tape and bias binding interchangeably although the term bias binding seams to be more often used in using bias tape when binding or finishing edges on quilts.

Bias tape is used for trimming or binding different portions of the garment such as the neckline or hems. It can finish the raw edges of an unlined garment. When you buy bias tape from the store you’ll find multiple types including single-fold and double-fold bias tape.

The single-fold bias tape isn’t true to the name – it actually has two folds and folds out into 3 sections. It basically has the raw edges of the fabric tucked in on each side. It can be used for going around hemlines or curved edges on one side of the fabric. It can also be used to trim areas of the fabric outside the edge (for instance – you might want a strip of an accent fabric part way up a garment).

Double-fold bias tape has three folds and folds out into 4 sections. It goes around the edge of the fabric and finishes it with a more defined edge.

You can purchase bias tape at the store in about a ton of different colors…or you can Make Your Own Bias Tape. Bias tape comes in multiple widths.

OK – now that we have the academic stuff out of the way, let’s show you different ways to use bias tape in a project:

How to Use Bias Tape Method 1

So, step by step! Fold the bias tape double, enclosing the raw edges, and press.

Place the bias tape over the raw edge of the fabric.

Make sure the raw edge of the fabric is in the pressed crease of the bias tape, so all the way in between the folded tape.

Pin the tape into place, catching both sides of the bias tape and the layer of fabric.

Stitch into place, using a straight stitch. Stitch close to the edge of the bias tape, catching all layers in your stitching.

Above the finished hem. Thus the bias tape is visible on both sides of the fabric.

As seen above, the fabric is enclosed in between the folded bias tape.

Now off to the next way of how to use bias tape. This second way of attaching, has the same end result as the first one. However, this method requires stitching twice. It does give a more accurate result oftentimes – at least for me.

For this method, you open up one of the creases. This is pictured above.

Place the bias tape with the open folded raw edge along the raw edge on the wrong side of the fabric.

Pin the tape into place.

Stitch in the crease of the bias tape.

The right side of the fabric should look like the picture above now.

Press the bias tape up…

… and fold it over to the right side of the fabric. Make sure it just covers the stitching made previously.

Pin the tape and stitch it into place, neatly along the edge. Ideally, you should catch the back side of the bias tape as well. This isn’t necessary for keeping it in place, however, it does look neat.

As you can see in the photo above, if not done very precisely the first stitching can peek out from underneath the bias tape. Provided you caught both sides of the bias tape in your topstitching, you can simply seam rip those peeking stitches.

Above then how it should look in the end, without any sloppy stitches showing.

So front and back of your fabric and bias tape. The bias tape should look pretty much identical on both sides.

How to Use Bias Tape Method 3

Now off to the third way how to use bias tape, which provides a different look! This way, the bias tape is completely on the wrong side of the fabric. Thus it is not visible on the right side. However, this does provide a neat finish, almost like a facing, on some items. Plus, it is easier to hem a curve this way than it would be to really hem it since the bias tape does adapt to curves easily. You can use double-fold bias tape in this application without any alteration or additional pressing.

Stitch in the crease of the bias tape.

Fold the bias tape up and fold it completely over to the wrong side of the fabric.

Stitch into place along the edge of the bias tape.

The right side of the fabric should look like the picture above, like any regular wide hem.

On the wrong side, the entire width of the bias tape is visible.

So now you have it: three ways of how to use bias tape onto a hem. Which one is your favorite?

Thank you to Pienkel for this excellent tutorial on How to Sew with Bias Tape. I’ve hoped you learned something today and can apply it to your projects! To share creations, see special offers, and get sewing assistance be sure to join our Peek-a-Boo Pattern Shop Facebook Group. Here’s a few other tutorials you might like. 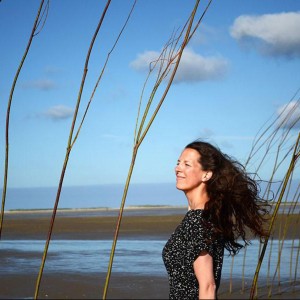 Mother of three cute little monsters (1, 4 & 6), married to one, living on a tiny island in the Netherlands, enjoying home, sewing machine and creating! I blog about my creations and the rest of my life at www.pienkel.com, you're very welcome to visit me there!