I seriously have the hardest time naming my blog posts! So since this is a mashup, I just mashed up the names…genius, right?  It all started when I saw the CUTEST little rompers (apparently they’re called one-pieces now….who knew?) at Old Navy. Now, being the crazy person that I am, I started playing around with my patterns mentally, and figured I could probably make my own. So here is a little tutorial on how I mashed the Lil’ Long Johns with the Hangout Hoodie to create that adorable thing up there!

I had a few different options floating around in my head. This is the one I was trying to recreate: But there was also this one: How easy would that be with the Varsity Cowl and Lil’ Long Johns??

Ok, so on to the tutorial. Prepare your pattern pieces. I was making a newborn size in the lil’ Long Johns, so to mash that up with the hangout hoodie (which starts at 6 months) I printed my hoodie pattern at 80% scale. I didn’t need to go so low, 90% would have probably been ok.

This is how I work with the same pattern piece for front and back (with the different neck cut lines):

I cut into the neck to the dotted line (see the green lines? That’s how I cut the paper), and then I can fold back the paper when I cut my front pieces. Now I laid my lil Long Johns pattern piece on top of the front bodice of the Hangout Hoodie. I know the sizing is all crazy on these (that’s because I purposely printed the hoodie at 80% scale….you won’t have to do that if the pattern sizes are the same), but I matched up to the 3T hoodie size. This tells me which hood size to use that will fit perfectly on my mashed pattern. Then I marked (on my Lil’ Long Johns) where the cut line is for the hoodie placket. For this newborn size, I decided I wanted it a bit longer to make dressing easier. That skewed my hood binding measurements slightly. If you don’t want to complicate things, just stick with the actual placket length 🙂 Remember…mashing patterns is not an exact science! I now had a lil Long Johns body piece with a Hangout Hoodie placket cut-out (remember, that placket cut-out is for the front only – not the back!). Once that was done, I could cut out my pattern pieces. You obviously don’t need to cut out the neck binding or placket piece for the lil Long Johns. You’ll be cutting out a hood and hood binding instead using the Hangout Hoodie pattern pieces.

I also decided to add the pocket from the hoodie pattern. I modified the shape just slightly (purple line is the original, green line is my modified line): Since this is the only part that isn’t covered in either of the original pattern instructions, I’ll give you a quick rundown of how I did the kangaroo pocket. Alternatively, you could just do it as stated in the Hangout Hoodie pattern, but I wanted it to look more like my inspiration photo!  So I cut one of the pocket and two strips of contrast fabric about 5″ x 1 1/2″ each: Fold the strips in half lengthwise (hotdog bun style) and sew/serge those to the curved sides of the pocket. Then center the pocket where you’d like it to be on the front piece of the lil Long Johns and mark the bottom and up the sides a little. Now flip the pocket over, still keeping it centered, and move it up over the marked line 1/4″. Turn in the sides 1/4″ and pin in place. Sew across the bottom of the pocket on the 1/4″ line: Flip back up, and press. Then fold in the top of the pocket 1/4″ and pin. Topstitch along the bottom, two straight sides and the top leaving the contrast curved sides open:

Once that’s done, you can put the body of your Lil Long Johns together following the pattern instructions. Then add the hood and the placket from the Hangout Hoodie and you’re done! Have you mashed up any patterns lately? Show them off over in the PAB Facebook group! 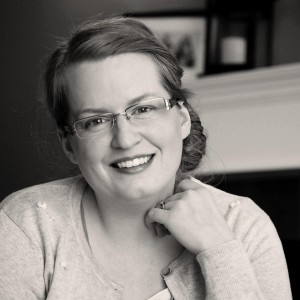 I'm a SAHM to my two crazy munchkins. I've been sewing since I can remember, but it wasn't until I had my little girl that I really got on the PDF pattern wagon - now there's no stopping me! I love modifying patterns to make them my own, so you'll probably never see the same pattern twice... Keep up with my sewing adventures at The Crazy Tailor